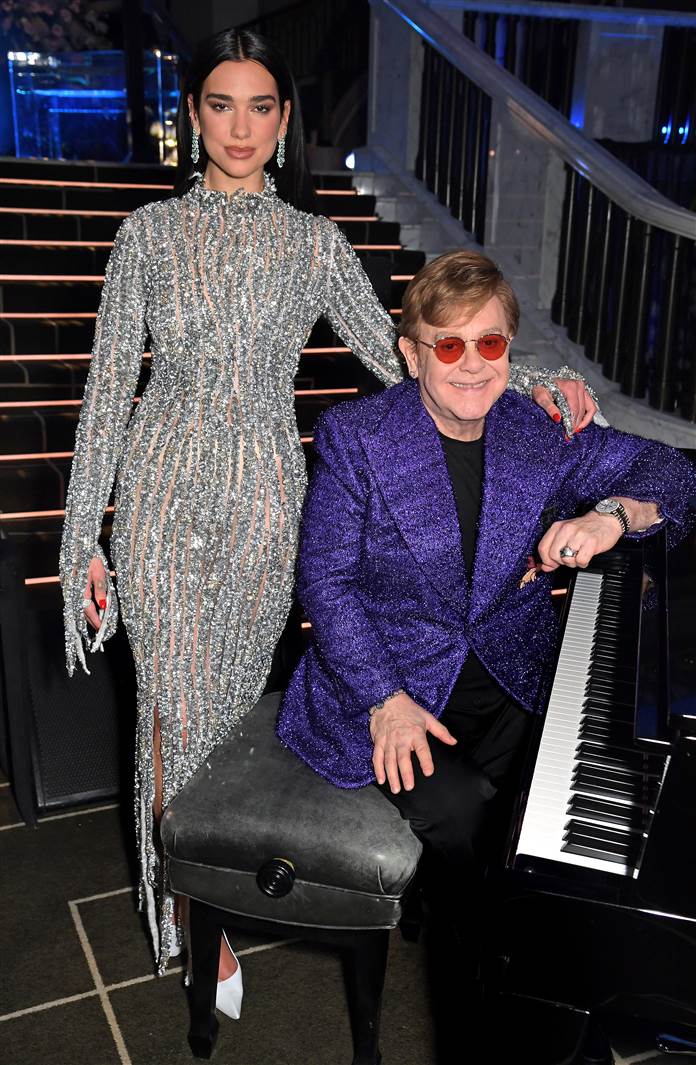 For the first time, the famed Oscar party will be held virtually and kick off with a Pre-Show Special open to supporters

LOS ANGELES, March 22, 2021 – The 29th annual Elton John AIDS Foundation Academy Awards Pre- Party will be hosted by Emmy® and Tony Award®-winning actor and New York Times bestselling author Neil Patrick Harris alongside Sir Elton John and David Furnish, with a stripped back performance by GRAMMY® Award-winning artist Dua Lipa for the virtual event on April 25, 2021, plus other names to be announced. For the first time, Foundation supporters worldwide are invited to attend the famed Oscar party by joining a 60-minute Pre-Show Special produced by Fulwell 73 at Rosewood London. Tickets for the Pre-Show are currently on sale via Ticketmaster. The Pre-Party Special will be powered by Cisco Webex to securely bring the event live to audiences.

‘This year, we are bringing our Oscar Party into people’s homes for the first time virtually for an unforgettable evening with David (Furnish), myself, our dear friend Neil Patrick Harris and the incredible Dua Lipa plus many fabulous surprise names,’ says Sir Elton John, Founder, Elton John AIDS Foundation. ‘Now more than ever, we need to ensure that one pandemic does not override another, and we cannot forget the 38 million people living with HIV globally who need our care, love and support so we hope everyone joins us for this special one of a kind Oscar Pre-Party.’

Since the annual event’s inception in 1992, The Academy Awards Viewing Party has supported the Elton John AIDS Foundation’s efforts to raise millions for their lifesaving work. With its presence across four continents, the Foundation is committed to overcome the stigma, discrimination and neglect that keeps us from ending AIDS.

The COVID-19 pandemic has affected everyone in unimaginable ways, but the Foundation is committed to ensure that one pandemic does not override another. UNAIDS estimates that there will be an extra half a million deaths from AIDS this year alone in sub-Saharan Africa due to service disruptions as a result of the COVID-19 pandemic. This year, the Foundation will raise money for young people at risk and living with HIV all over the world. This age group are smart and savvy and require health care services and support in different ways than adults do, and the Foundation will work to ensure that services are accessible on the platforms that are best suited to young people. The COVID-19 pandemic has forced the world to explore many modes of virtual health care and we need to ensure that this continues in a digital era to serve young people affected by HIV.

To bring the event globally, the Pre-Party Special will be hosted four times to meet the different time zones of a region’s broadcast of the Oscars: 4 PM PT / 7 PM ET on April 25 in the U.S.; 7 PM GMT on April 26 in the U.K.; 7 PM AEST on April 26 in Australia and New Zealand; and an optional repeat at 7 PM PT on April 26 in the U.S. Each Special per region is possible to host up to 100,000 attendees through Webex. This means 400,000 supporters of the Elton John AIDS Foundation and entertainment fans worldwide will be able to enjoy the Special for a great cause.

“It’s such an honour to be a part of one of the most iconic Oscar Parties and I’m really proud to support the Elton John AIDS Foundation to help tackle the stigma that exists around HIV as we need to build a kinder and more accepting world together. And to share the stage with Elton John will be a dream come true!” says Dua Lipa.

‘Young people represent 25 percent of the world’s population but are disproportionately affected by HIV making up 36 percent of new infections,’ says Anne Aslett, CEO of the Elton John AIDS Foundation. ‘For the first time ever, this year, the Elton John AIDS Foundation’s Academy Awards Viewing Party will be a special virtual ticketed show and we’ll bring the Party to your home. Just like the COVID-19 pandemic has forced the world to explore virtual events, it’s also forced us to explore many modes of innovative virtual health care to serve youth affected by HIV so this year, we’re raising funds to support young people at risk and living with HIV all over the world so we can continue the best care suited to youth in this digital era.’

‘We’re honored to partner with this legendary Foundation which has always been a leader in addressing inclusion issues such as access to HIV healthcare, treatment, and research for vulnerable populations,’ said Jeetu Patel, Cisco’s Senior Vice President and General Manager, Security and Collaboration. ‘With the Pre-show Special, we’re proud to be the bridge for the event taking place online for the very first time to host more audiences than ever before. This includes Webex helping to scale up to the Foundation’s goal of reaching 400x more people this year to advance the Foundation’s efforts to end AIDS.’

‘The young people affected by HIV today have already lost parents, grandparents, uncles, aunts to HIV over the past decade. Now they face the twin threats of HIV and COVID-19 for their generation. We need to prevent this catastrophe so that young people are equipped to deal with the huge challenges that lie ahead,’ says David Furnish, Chairman of the Elton John AIDS Foundation.

‘I’ve always been a huge supporter of the Elton John AIDS Foundation and could not be more honored to host this year’s virtual gala with my close friends Elton and David,’ says Neil Patrick Harris. ‘Coming off the back of working on ‘It’s a Sin’ about the AIDS epidemic in the 80s, this cause resonates more deeply with me than ever. The tireless work done by the Foundation to help end the AIDS epidemic is incredibly inspiring, and I’m proud to have a small part in the effort to continue raising awareness for the movement.’

Global pop superstar Dua Lipa firmly solidified her position as both a critical success and top radio performer when she released her GRAMMY® Award-winning #1 UK sophomore album Future Nostalgia in 2020 to worldwide acclaim. The album was the follow up to her eponymous 2017 debut, which is certified platinum, spawned 6 platinum tracks, and made Dua the first female artist in Brit Awards history to pick up five nominations, with two wins for British Breakthrough Act and British Female Solo Artist. Future Nostalgia landed on the year-end “Best Of” lists of everyone from Rolling Stone and Billboard, to the New York Times and Pitchfork. It is certified platinum in the US & UK and spawned multiple worldwide hit singles including the #1 hits “Break My Heart” and US 3x platinum lead single “Don’t Start Now,” which broke her personal best record of weeks at #1 at US Top 40 radio. In addition to breaking radio records, Dua is also a dominate force on streaming platforms, topping Spotify’s artist chart as the most streamed female artist on the platform and is currently the second biggest artist overall with over 60 million monthly listeners. Future Nostalgia now has 7 billion streams across all platforms worldwide. Dua received 6 nominations at the 2021 GRAMMY® Awards, including Record, Song and Album of the Year. She is now a three-time GRAMMY® winner, having received awards for Best Pop Vocal Album this year and for Best New Artist and Best Dance Recording in 2019.

Fans can purchase tickets to the Oscar Pre-Show special for $19.99 via Ticketmaster at https://shops.ticketmasterpartners.com/elton-john-aids-foundation. Please visit www.eltonjohnaidsfoundation.org for additional information.

About The Elton John AIDS Foundation:

The Elton John AIDS Foundation was established in 1992 and is one of the leading independent AIDS organisations in the world. The Foundation’s mission is simple: an end to the AIDS epidemic. With the mobilisation of our network of generous supporters and partners, we fund local experts across four continents to challenge discrimination, prevent infections and provide treatment as well as influencing governments to end AIDS. www.eltonjohnaidsfoundation.org

Cisco Webex delivers collaboration solutions that give everyone a voice — and business the ultimate edge. Because, when businesses enable employees to bring their best selves to work, everyone wins. Designing for these connections is at the heart of everything we do — from product design to new innovations to the way we engage inside and out. To learn more visit www.webex.com.

Cisco (NASDAQ: CSCO) is the worldwide leader in technology that powers the Internet. Cisco inspires new possibilities by reimagining your applications, securing your data, transforming your infrastructure, and empowering your teams for a global and inclusive future. Discover more on The Network and follow us on Twitter.

Cisco and the Cisco logo are trademarks or registered trademarks of Cisco and/or its affiliates in the U.S. and other countries. A listing of Cisco’s trademarks can be found at www.cisco.com/go/trademarks. Third-party trademarks mentioned are the property of their respective owners. The use of the word partner does not imply a partnership relationship between Cisco and any other company.

Fulwell 73, set up in 2005 by lifelong friends Ben Winston, Leo Pearlman, Ben Turner and Gabe Turner, strives to make top-quality television and film productions. In January 2017 it was announced that James Corden would be joining the company with immediate effect as a fifth full partner.

The company first came to the public’s attention in September 2007 with the release of its debut feature In the Hands of the Gods (Lionsgate). Since then Fulwell’s theatrical film releases include: the most successful sports documentary of all time, The Class of 92 (Universal Pictures); the huge box office hit One Direction 3D: This is Us (Sony/Columbia), I Am Bolt (Universal) and critically acclaimed and award winning independent features such as The Guvnors (Metrodome). Fulwell is currently in production on their first studio feature film Cinderella for Sony Pictures, based on an original idea from James Corden, written and directed by Kay Cannon, starring Camila Cabello, Idina Menzel, Billy Porter, Pierce Brosnan and many more.

Recent television productions include Sunderland ‘Til I Die for Netflix, Peter Crouch: Save Our Summer and Jack Whitehall’s Sporting Nation for BBC, Quibi’s Cup of Joe, the hit documentary Bros: After the Screaming Stops for BBC, Carpool Karaoke: The Series for Apple,  Auschwitz Untold: In Colour for Channel 4 and the hit Gavin & Stacey Christmas Special for BBC One. It is also the producer of multi Emmy and Critics Choice award winning, The Late Late Show with James Corden, with CBS Television Studios.

Rosewood London, centrally located in the heart of London on High Holborn and housed in the original headquarters of the Pearl Assurance Company, showcases a sensitive renovation of the 1914 Edwardian, Grade II-listed building. Combining English heritage with contemporary sophistication, the retained Belle Époque architectural features include the original carriageway entrance to the grand courtyard and a spectacular Pavonazzo marble staircase, which rises over seven storeys. The hotel has the feel of a stylish London residence and houses 263 guestrooms and 45 suites including the Grand Manor House Wing, an exclusive seven-bedroom suite with its very own postcode. Tony Chi and Associates created the interiors of the public areas including 11 event spaces and the Mirror Room, serving elegant, innovative cuisine and afternoon tea. The Martin Brudnizki-designed Holborn Dining Room and year-round outdoor terrace offer British classics with a twist whilst Scarfes Bar serves creative cocktails alongside live jazz.